On Wednesday 5th of Dec. Cromarty Firth Cycling Club held their annual prizegiving dinner at the Birch Tree Restaurant at Delny. After a delicious meal it was down to club chairman Eric Soane to present the trophies to the 2012 winners. First up was the Macgruther and Marshall Cup for fastest 25tt which went to David Stuart, Then the CFCC track trophy which went to Donald Stephenson, The Points Shield went to David Stuart, The David Bruce Memorial Cup for 50tt on handicap went to Alan Cook, The Colorama Cup for most improved rider at the midweek 10tt went to Debbie MacDonald, The George Boyd Trophy for fastest 10tt went to David Stuart, The Martin Baker Shield for Vets 25tt went to Mike Gordon, The Goodtread Cup for Fastest Lady went to Debbie MacDonald and the Al Sutton MTB Shield went to Ben Stuart. 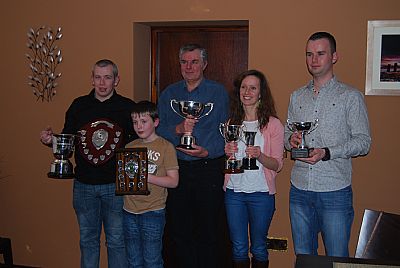