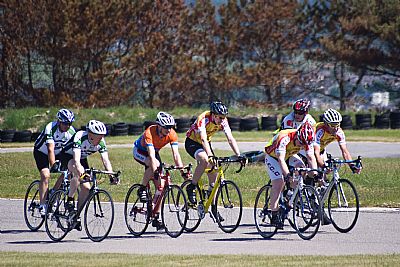 CFCC had five riders competing in the Golspie Go Race Crit on Sunday at the Golspie Kart Track. The Go Race Crit was 20mins + 2 laps of racing. Right from the start there was a breakaway group of seven riders who got away but Mike Gordon, Declan Caveny and David Stuart all managed to get in the break. The ensuing laps were ridden at a fast pace as some riders tried to break away and David found himself off the back a few times and getting help from Declan and Mike to get back on. As the race went on the seven were still together as the lap board went up for 2 to go then as they came round with 1 to go Neil Sharpe of MFCC took off to try and solo the last lap with the bunch chasing hard as Neil got to the last corner David was right on his wheel with Declan and Mike right behind him. It came down to a sprint to the finish line with David Stuart taking it from Declan then Neil Sharpe and Mike in fourth with less than 0.2 of a second splitting the four riders. The other CFCC riders came in slightly further back with Ross Bannerman in 7th and Alan Cook in 11th. 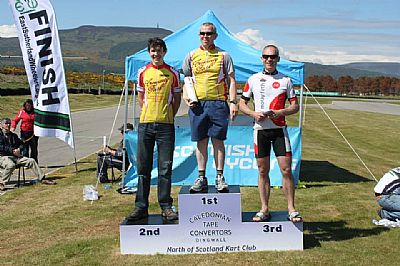